Martyr of the Marginalized 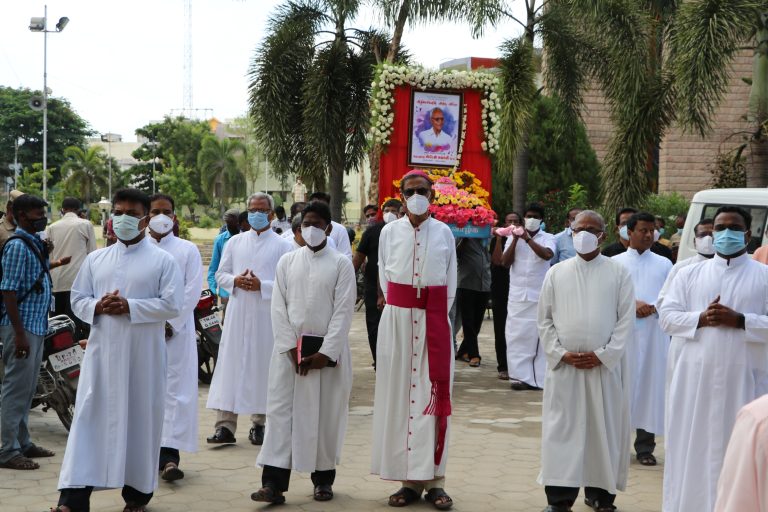 ARCHDIOCESE OF MADRAS – MYLAPORE
The Urn containing the ashes of Fr. Stan was received from ISI-Bangalore by Chennai Province on 17 July. On 18 July, we started the Pilgrimage for Justice in Loyola College, Chennai, with a solemn Eucharistic celebration at Christ the King Church followed by the homage by Hon. Mr. M.K Stalin, Tamil Nadu Chief Minister and other dignitaries. The Urn was kept in the church till 3.30 pm, for the public to pay homage and then a civic function was organised at Bertram Hall.

DIOCESE OF CHINGLEPUT
On 19 July, the Jesuits living in the diocese gathered in Paathai Centre to receive the Urn. After offering a special Mass there it was taken to the Cathedral. Rt. Rev. Dr. A. Neethinathan, the Bishop of Chingleput, received it in the presence of priests, religious, friends from other denominations and the faithful. After public’s homage to Fr. Stan’s ashes a civic function was held to express our gratitude to Fr. Stan and to demand justice for his unjust arrest and death. Thanks to Fr. Yesumarian and other Jesuits for effectively planning the day’s events.

ARCHDIOCESE OF PONDY – CUDDALORE
Chingleput
The urn was received by Jesuits from PALAVAI and ARCALI with a meaningful dance by Irular tribal youth on 20 July. The day began with a Holy Mass followed by public homage and ended with a civic function in the evening. Fr. Maria Felix Kennedy in collaboration with the Parish Priest of Tindivanam organized well the events at the parish premises. The Urn was handed over to Jesuits by the tribal women. The Urn reached AHAL, Kilpennathur on the same day and it was well received.

DIOCESE OF VELLORE
Fr. Selvaraj and the Jesuit communities in the diocese of Vellore took the Urn to their communities and finally to Vellore. On 21 July, a solemn Eucharist was celebrated at Sahaya Matha Church, Kilpennathur and then the Urn was carried to Loyola College, Vettavalam. A civic function was held at Vettavalam. On the same day, the Urn was taken to JPLI, Kasthambadi. It was received and taken in a candle light procession. It was encouraging to see our pre-novices keeping vigil the whole night. On 22 July, there were two Masses, one at Arni parish for the public and the other at JPLI for our pre-novices and Jesuits. In the afternoon, the Urn was taken to Ranipet. Homage was paid at Loyola Industrial School and the parish by our staff, priests, religious and the laity. In the evening, a grand civic function was organized at Don Bosco School, Katpadi. On the same night, the Urn reached Allalapatty, Harur and the Jesuits received the Urn prayerfully.

DIOCESE OF DHARMAPURI
On 23 July morning, the Urn was brought to Arulagam and kept for paying homage till the afternoon. In the afternoon, we moved the Urn to Fatima Church, Krishnagiri. The Parish Priest and the VG of the diocese received the Urn and placed it for public homage. In the evening, there was a solemn Eucharistic Celebration, presided over by Rt. Rev. Dr. Lawrence Pius, the Bishop of Dharmapuri. Priests, religious, laity and the political leaders in Krishnagiri participated in the event. After the Mass, the Urn was taken back to Harur.
On 24 July, after a procession around the Sacred Heart Church, Harur, followed by the Eucharistic Celebration and the civic function, the urn was taken to Cathedral, Dharmapuri in the afternoon. Then, after the public homage, the Eucharist was celebrated by Rt. Rev. Dr. Singarayar, the Bishop Emeritus of Salem. Both in Krishnagiri and in Dharmapuri, the entire event was organized by the Bishop and the diocesan priests themselves. We thank them for their enthusiasm and cooperation. Thanks to Fr. Albert Joseph and Arulagam Jesuits for planning and effective execution of the Pilgrimage. On the same night, the Urn was taken to the Bishop’s House at Salem. Rt. Rev. Bishop Lawrence Pius, Administrator of Salem diocese and the officials received the Urn.
Krishnagiri
Harur

DIOCESE OF SALEM
On 25 July, from morning 6.00 am, the Urn was exposed in the Salem cathedral for public homage. At 10.00 am, there was a solemn Eucharistic Celebration, presided over by Rt. Rev. Bishop Lawrence Pius, followed by a civic function at the cathedral premises. Political leaders and other people of good will participated in it and expressed their solidarity. We thank the Diocesan administration for their cooperation. In the afternoon, the Urn was taken to Loyola College, Mettala. The Jesuits, along with their staff, neighbouring priests and religious paid homage to Fr. Stan in the Holy Eucharist. We thank Fr. Jeyaraj Boniface and the community for all the arrangements made. Same evening the Urn was taken to Mettupalayam.

DIOCESE OF OOTACAMUND
The Jesuits in Ooty, Mettupalyam and Makkampalayam planned to have the Pilgrimage in Ooty and Sathiyamangalam. On 26 July, they gathered in St. Joseph’s Ooty to celebrate the Holy Eucharist and paid homae to Fr. Stan. Then the Urn was moved to Nazerath Convent where the FMM Sisters and the staff of Nazerath School received it and kept for public homage. In the evening, Rt. Rev. Dr. Amalraj, the Bishop, the political leaders and the social activists participated in the civic function which was organized in collaboration with CRI, Ooty. On the same day, the Urn was taken back to Mettupalayam.
On 27 July, people from PARAN, Makkampalayam, the priests, the religious and the faithful from Sathy vicariate received the Urn at Sathiyamangalam parish and celebrated a meaningful Eucharist. Then the Urn was exposed for public homage and in the evening there was a civic function.
We thank all the Jesuits for their cooperation and Fr. Richard, for his wonderful coordination. On the same evening, the Urn was taken to Dindigul, with police guard to be handed over to MDU. On arrival around 10.00 pm, the urn was received by the Superior and Novice Master and was taken to the very chapel where Fr. Stan pronounced his First Vows in the Society sixty-two years ago, in a candle light procession.

DIOCESE OF KUMBAKONAM
The Urn of Fr. Stan reached St. John de Britto church, Thirumanur, on 2 July morning, from VMI, Vilangudi. After the Mass and floral tribute, the Urn was taken to Viragalur, his native village in the afternoon. It was received at the village entrance by the Parish priest and the village leaders in the presence of both the Provincials of CEN&MDU and taken in procession to the church. On the way it was kept for a while in his brother’s house for homage. The requiem Mass presided by Rt. Rev. Bishop Francis Anthonysamy, Kumbakonam, was concelebrated by about 40 priests. It was followed by public floral tribute and civic function. Thanks to MDU for coordinating this entire event of Pilgrimage for Justice. All the participants were served food (md;djhdk;). Then the Urn was taken to Clive House, Tiruchi.

My Personal Experience
My journey with Fr. Stan on this “Pilgrimage for Justice” was enriching and hopeful. I felt more consoled when I saw people coming in numbers to pay homage to his mortal remains. His life and mission is an inspiration to all those who stand for justice and peace. This Pilgrimage for Justice has sown the seed of justice in the hearts of many, irrespective of religion, age and region.
In this Pilgrimage, people of good-will not only paid homage to Fr. Stan but also strongly expressed that India today needs to respect the Constitutional values and give due respect to the human rights. He has become more alive than before; the caged bird’s song is heard louder. He has inspired the Jesuits, other priests and religious to be bold and to commit more for the cause of justice; politicians to respect and implement the Constitutional values and all faithful to join hands with people of good will in fighting for justice.
I thank all the Jesuit friends for making this pilgrimage more meaningful and effective. I thank God for this wonderful opportunity to be a part of this “Pilgrimage for Justice with Fr. Stan”.