The history of the Society of Jesus in Tamil Nadu traces back its origin to the arrival of St. Francis Xavier, one of the first companions of St. Ignatius of Loyola. Having set his foot in the Indian soil in 1542, he vigorously preached the Good News, in the southern part of the country, in the south of Tamil Nadu in particular. It wouldn’t be an exaggeration to say at all that the faithful of Tamil Nadu owe a lot to this first Jesuit in India, who went extra miles to introduce them the face of Christ. Probably he was too zealous in his missionary activities, the Lord granted him the unique grace of letting his body remain incorrupt even after centuries of his demise.

Following the footsteps of this great missionary, quite a lot of Jesuits came from Europe and continued the work of evangelization. The notable among them are Antony Criminali SJ (1520 – 1549) who was martyred by the Badagas in Vedalai near Ramanathapuram, Henrique Henriques SJ (1520 – 1600) who is called the Father of the Tamil Press, Robert de Nobili SJ (1577 – 1656) who founded the ‘Madura Mission’ in 1606. There were also few other extraordinary Jesuit missionaries like John de Britto SJ (1647 – 1693) and Constantine Joseph Beschi SJ (1680 – 1747), known as ‘Veeramamuivar’ who rendered marked service in the Madura Mission. Whilst the former gave his life for the sake of the Good News at Oriyur, the latter became a scholar par excellence in the field of Tamil literature, so much so that he is even today considered to be the Father of Tamil prose. These and others were the giants who built up the Madura Mission. In fact, the mission that we are making a reference here is known as the ‘Old Madura Mission’ which was taken care of the Portuguese Jesuits. It suffered a severe bolt in the wake of the universal suppression of the Society of Jesus, by Pope Clement XVI, in 1773.

Years later, when the Society was restored by Pope Pius VII in 1814, Very. Rev. Fr. Roothann, the then Superior General entrusted the Madura Mission to the care of the Jesuits of Lyon in France. Subsequently, a group of four energetic French Jesuits arrived in Pondicherry in 1837 and moved to Tiruchirappalli in the course of time. With the help of many other missionaries who joined them later in the mission, they spread their missionary wings in the state of Tamil Nadu for the greater glory of God. As Madurai was the headquarters for the ‘Old Madura Mission’, Trichy remained the same for the newly founded ‘New Madura Mission’. Thanks to the tireless and selfless works of these French missionaries, we have a solid mission base in the state of Tamil Nadu, especially in the south. Territorially speaking, the whole of Tamil Nadu has been known as the Jesuit Madurai Province (drawn from the name – Madura Mission) since 1952, when it was bifurcated from its mother Province of Toulouse in France and made an independent Province.

The history of Jesuit Madurai province is, hence, long and rich. With its remarkable missionaries and conspicuous activities among the poor and the oppressed down the centuries, the Jesuit Madurai Province has also been always in the overall history of the Society of Jesus. Sensing the need of the hour, the Madurai Province, in its own time, gave birth to two other provinces in the South India, namely Kerala and Andhra Pradesh.

In the same line, with a focused interest to serve and empower the Dalits and the other marginalized people in the northern Tamil Nadu, a new Chengai Mission was started in 1990, comprising of a handful of civil districts in the north. In 2002, the Chengai Mission was christened as the Chennai Mission for a broader missionary scope. In 2007, Very. Rev. Fr. Adolfo Nicolas, the then General, officially promulgated the creation of Chennai Mission, with Rev. Fr. A. Victor as its first Mission Superior, followed by Fr. Jebamalai Irudayaraj as its Second Mission Superior from 2013 to Dec, 2019. After its steady growth and development in various aspects for the last 29 years, the Chennai Mission is promoted to the status of an independent ‘Jesuit Chennai Province’, with a motto “Imitating Jesus in Liberating Humanity”, in December 2019, with Rev. Fr. Jebamalai Irudayaraj, SJ as its first Provincial. The Chennai Province comprises the nine Ecclesiastical Dioceses of the North and West parts of Tamil Nadu, namely, Madras-Mylapore, Chengelpet, Vellore, Pondy-Ciddalore, Kumbakonam, Salem, Dharmapuri, Coimbatore and Ooty.

In an effort to alleviate discrimination and bring about the needed transformation in the caste-ridden society, the Jesuits in Tamil Nadu have discerned the signs of time and come forward to create an independent entity for greater service among the needy. May God Almighty continue to journey in this new venture, with all the members and collaborators of this newly created Jesuit Chennai Province (CEN). 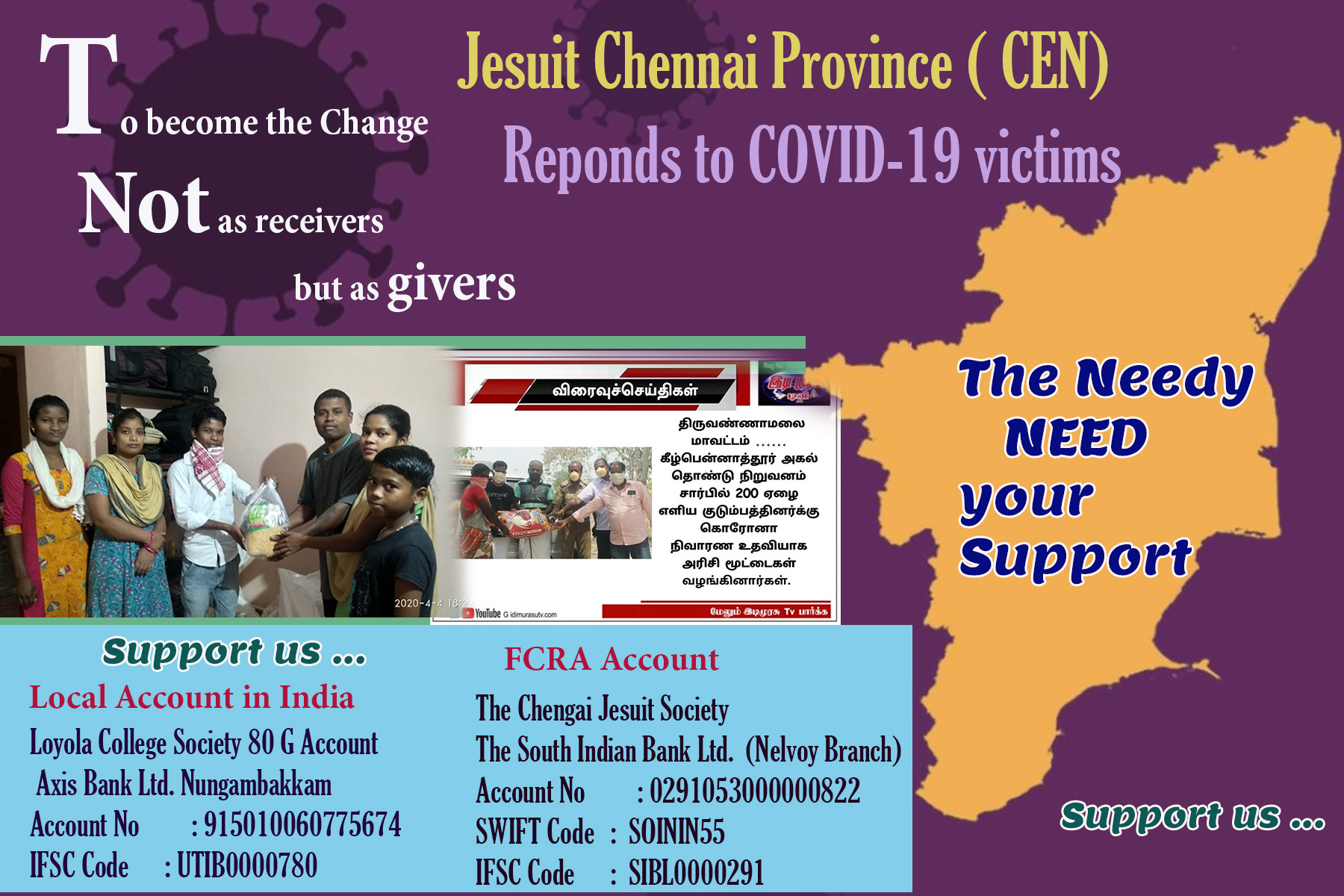