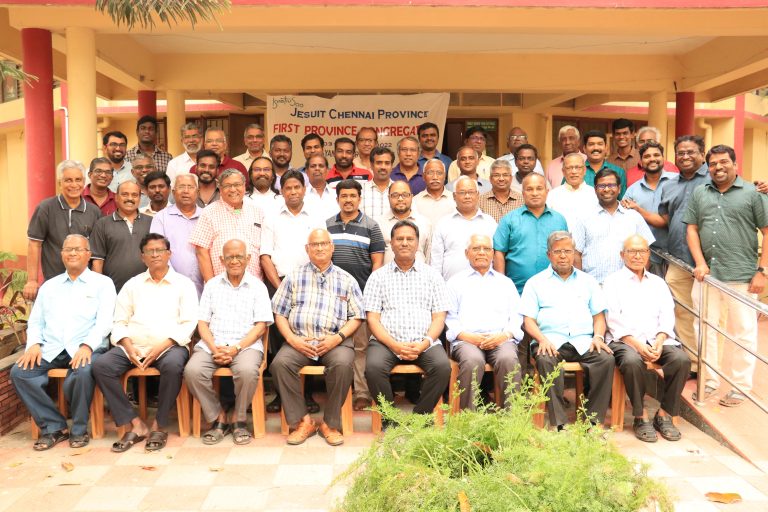 The first Chennai Province Congregation (PC) was held at Dhyana Ashram, Chennai from Mar 3rd (evening) to 6th (evening), 2022, in view of the 71st Procurators’ Congregation convoked by Fr. Arturo Sosa, the Superior General. Of the 49 delegates (Ex officio – 4, elected – 40 and appointed – 5), Fr. Jerome Kulandaisamy (appointed) could not participate due to his ill health. The PC had seven sessions and each session began and ended with prayers.
On the first day, Fr. Jebamalai Irudayaraj, Provincial inaugurated the PC after the prayer to the Holy Spirit by Fr. Alangaram Arockiam and Fr. Arokia Dass. Then, Fr. Antony Robinson and Fr. Robin Sahaya Seelan were elected as Secretary and Assistant Secretary respectively, for the PC and Fr. Yesumarian Lourdunathan andFr. Jerry Rosario were elected as Deputies for Sorting the Postulates. After supper the PC continued the session on the State of the Province presented by the Provincial. The session was concluded with a prayer by Fr. Maria Arul Raj A.
The second day began with the Eucharist byFr. Yesumarian Lourdunathan, Fr. Amaladoss Michael, Fr. Selvaraj Arulnathan and Fr. Philip Kumar presented their reflections on the Letter of Fr. General regarding Procurators’ Congregation (15 Jan 2021) with international, national and provincial perspectives, respectively. After the presentation of the Financial Status of the Province, by Fr. Joseph Ignaci, Province Treasurer, the delegates had discussion on the State of the Province and then PC observed silence till the PC elected the Procurator next day.
On the third day, as assigned for election, after the Mass celebrated by Fr. Britto Vincent and a silent prayer before the Crucifix the PC elected Fr. Yesumarian Lourdunathan as the Procurator and Fr. Robin Sahaya Seelan as the Substitute. Then the PC had presentations on reasons “for calling a GC” and “for not calling” by Fr. Yesuamarian Lourdunathan and Fr. Raj Irudaya respectively. In the next session, Fr. Joe Arun C.,Fr. Parthasarathi Narayanasamy, and Fr. Mag Bay de Lawrence shared realistic and challenging aspects ofUAP & PAP, Accompanying Youth, and Vocation Promotion respectively. Then we had a session deliberating on the Postulates. The approval of the postulate was kept for the next session.
On the last day, the delegates spent quality time in deliberating in depth on the postulates and various concerns of the Province based on the State of the Province. Finally, the Congregation together proposed a postulate to Fr. General. Following this, the PC voted for “not calling for a GC“. Fr. Provincial formally concluded the session with Te Deum singing பாடுங்கள் ஆண்டவர்க்கு புதியதோர் பாடல் பாடுங்கள்.
Finally, Fr. Provincial, Procurator Elect and Coetus Praevius concelebrated the thanksgiving Eucharist with the delegates. At the end of the Mass Fr. Ilanko Xavier thanked and appreciated the services of all those involved in the smooth and effective conduct of the PC, and specially thanked Dhyana Ashram community for all the excellent arrangements made and the hospitality extended.