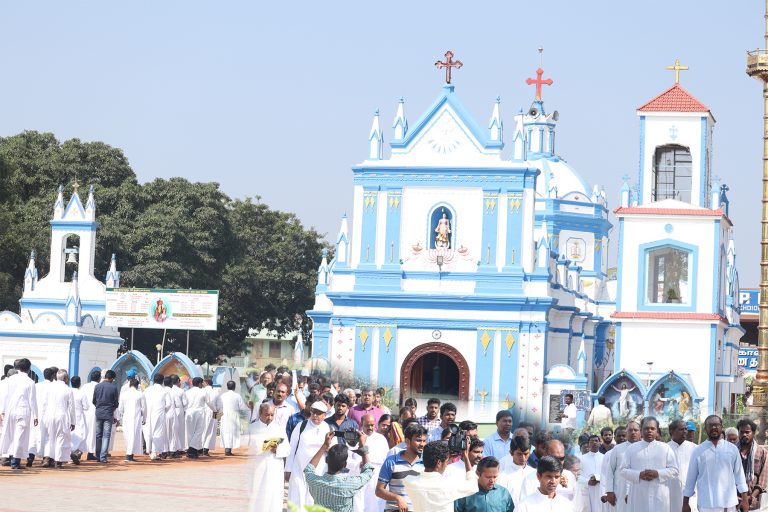 The pilgrimage to Konankuppam Shrine was the very first proposal that the Provincial of Chennai Province came up with in the first Superiors’ Meeting held after his installation. It was unanimously accepted, and the Provincial asked Fr Selvaraj Arulnathan, the Superior of Loyola College, Vettavalam, to be the Convener and to organize the entire program on Feb 15, 2020.

Periyanayagi Madha Shrine has a great legacy, as far as the Jesuits of Tamil Nadu are concerned, since it was Veeramamunivar, one of the pioneering missionaries among the poor and lower caste Christians in the Old Madurai Mission, who founded this church and invented this beautiful Tamil name for our Lady. Most of the Jesuits of Chennai Province and their collaborators, and some from Madurai Province area, along with the jubilarians of the Province, participated in this historical pilgrimage under the banner “To Thank and to Seek Blessings”, a fitting expression of our sentiments of gratitude  for the new born child, the Jesuit Chennai Province.

Fr Selvaraj Arulnathan, efficiently coordinated the programme, meticulously planned and executed every detail. The sub-committees which took up various responsibilities added flavor to the event. We started the pilgrimage on foot from the entrance of the village, about a kilometer from the shrine. Fr S. M Selvaraj, invoked the blessings of the Holy Spirit and flagged off the procession, and Fr Gerlin, led us in prayer and singing. It was a moment of grace for all the pilgrims and also for the villagers to see hundreds of priests, brothers and people from our various institutions undertaking this pilgrimage.

With our musical stalwarts, Frs Rajarathinam and Britto Vincent, leading the choir, the whole liturgy put us in the mood of God’s presence. The entrance procession, a Kummi dance, performed by the pre-novices of JP Leonard Illam, Kasthambadi, gave a perfect start to the liturgy. Fr Dominic Jeyakumar, the former Treasurer of Jesuit Chennai Mission preached the homily which brought home to all present, the significance of the pilgrimage, the missionary contribution of Veeramamunivar and the future direction of the fledgling Jesuit Chennai Province, couched in chaste Tamil.

After the Mass, four veteran Jesuits Fr Michael Alosanaya, (60 years in the Society), Frs Frederick Xavier Joseph and Jerry Rosario, (50 years in the Society) and Fr Ignatius Viyagappa (50 years in Priesthood) were felicitated. Barring Fr Jerry who was absent, the other three were honoured with shawls by the Provincial, and with mementos by the acting Socius, Fr Devadoss Mudiappasamy. The Provincial thanked them for their long and selfless service in various fields. Fr Michael Alosanaya gave the acceptance speech.

During the Provincial’s address to the gathering, he thanked the Rector of the shrine, Fr Devasagayaraj, for his generous co-operation in all respects and especially, for his warm hospitality. To mark this great event, Fr Provincial announced an endowment scholarship, with an amount of Rs.10, 00,000 to be invested as seed money in the name of the Parish of Konankuppam. The annual interest accrued will be given to two Catholic Dalit students, one boy and one girl, from the parish for their education until they complete their college studies. Fr Selvaraj Arulnathan, proposed the vote of thanks, acknowledging the support and cooperation extended to him by all, especially by the province curia and the various committees. At the end of the programme, Fr Provincial opened the newly constructed Thembavani Meeting Hall, and dedicated it to the parishioners and the pilgrims of Konankuppam.